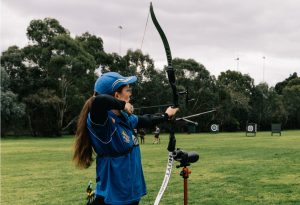 I first went to Kew City Bowmen on a bit of a whim. In August 2016, I wanted to have a crack at going to the Olympics and I’d decided archery would be my sport. I’m not very ‘sporty’ but I figure if you’re going to do something you may as well set a big goal. A quick google search for archery clubs sent me to a ‘Come & Try’ session at KCB. I turned up and told Rob, the Club’s instructor, I’d never done archery before and I wanted to go to the next Olympics. As far as I could tell, he took me seriously!

I was hooked on archery from the first arrow. Rob, and the other members, gave me really clear instructions and encouragement and I progressed quickly. It took me 2 years to medal in my first National competition in New Zealand (I’m a Kiwi; don’t be jealous!) and I made the national team shortly thereafter. The year since making the team has been packed with tournaments, including competing at World Cups in Turkey and Germany. I’m currently training for selection to the NZ 2020 team and I still have Olympic selection in my sights. KCB has been the perfect club for me; it’s small and easy going with really experienced, friendly and knowledgeable members.

Thanks for visiting Kew City Bowmen!

The club rooms are near the Lister Street car park, Melway Reference: 45 K1